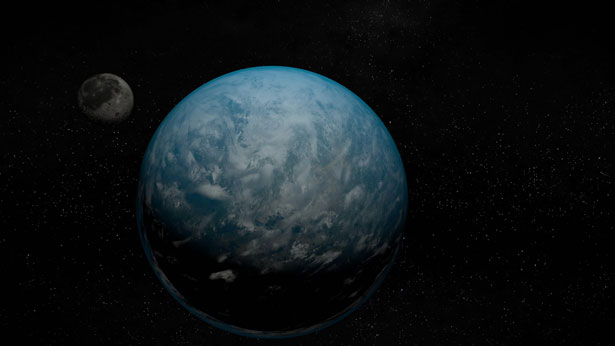 Photo: Moon and Earth from Space by Виталий Смолыгин

Had it not been for the discovery of something strange in his garden pond, ten-year-old David Dawson would have had another dull day in what was fast becoming a dreary week. The summer holidays had arrived, bringing endless days of football in the park or WWZ WrestleFest on the Playstation. Except that good things never last. Everything was fine for the first four weeks, apart from the traditional British weather. But can you have too much of a good thing?

“Well, normally, you’re off to spend the day with Josh.” David shook his head and stared at the ceiling.

“I told you ages ago, Mum, he’s on holiday for two weeks. Why did he have to go now? It’s just not fair.” David looked down from the ceiling and took a couple of backward steps, just in case his mum was tempted to give him a cuddle. Why didn’t she realise that he was too old for all that stuff? He nervously pulled the peak of his baseball cap further over his face. His mum gave him a knowing smile, but nothing more.

“David, you can help me with the ironing if…” But he had gone, out through the back door, to his garden retreat. Or ‘Mission Control’ as he had named the former shed. Why? Because David’s great passion, apart from football, WWZ WrestleFest, and spending quality time with his best friend Josh, was SPACE. Anything from Star Trek to Sputnik, Han Solo to Halley’s Comet. Which possibly made the strange visitor to his garden a little easier to explain. Or maybe not.
Without so much as an “Excuse me”, or a “Take me to your leader”, something that resembled a cross between a large firework and a shiny tin can, flew low over the lawn, bounced off the kitchen window, and dropped in the garden pond. Curiously, it hardly made a ripple on entry. Was this Science Fiction or a genuine U.F.O. alert? The sickening crack in the kitchen window looked real enough.
In the few seconds it took for David to reach the splashdown zone, the Koi Carp had recovered from their trauma, and were now swimming, without a care in the world. Maybe they had just forgotten the whole incident.  David certainly hadn’t. He peered into the same depths of underwater pondweed. Had the Alien Invasion already begun?
Being only ten, David had never seen a real alien before and didn’t know what to expect. It came as something of a shock to find out that this particular space invader was grey in colour, humanoid in shape and only four inches tall! The immediate answer to what it was doing in his pond was soon answered. It appeared to be a celestial variation on the breaststroke.

“Help me out of the pond, Earthling!” The little man spoke in a surprisingly powerful metallic voice.

“You speak English! Er… yeah, sure. There you go.”

“Rescue my craft or face the consequences!”

“Wow, wait till I tell Josh about this. He’ll go hyper!”

“Do not tell anyone of my arrival, or I will be forced to call in the Imperial Fleet!”

“Okay okay, let me put you in Mission Control to dry out, and I’ll come back for your spaceship. My name’s David by the way. What do I call you?”

“My Personal Identification cannot be translated into any earth language. The given name ‘Reg’ is your nearest equivalent.  ”

So that’s how Reg spent a few minutes drying in front of a portable fan in Mission Control, while David fished the craft out from the murky depths. Pulling in his prize, David was a little disappointed. His big chance to examine a spacecraft at first hand and it looked no better than a glorified tin can. He took the wet and dripping cylinder, pulled off the pondweed and placed it on the bench next to the little spaceman.

“Reg? Be honest, did you really travel from Outer Space in that?” Reg turned a deep shade of metallic blue. He bowed his head.

“Please forgive my earlier behaviour; I’m still learning your customs. It’s not a proper spacecraft, by the way. You don’t think I’d travel all the way from the Delta Quadrant in a food container do you?”  David smiled.

“That’s alright Reg, no harm done. So it is a tin can!” Reg looked sheepish.

“I’m on a Cultural Exchange visit to your planet. I’m currently starring in an interactive exhibit at the British National Space Centre at Leicester. We encourage young people visiting the Centre to have a go and make their own spacecraft out of basic materials. I was chosen to pilot the winning entry and see how far I could get. I think this one travelled about forty-five miles – that’s the best yet! One or two problems with the landing gear, but it’s not bad for a first flight.”

Aliens, thought David. So that’s what they have at the British Space Centre!

Reg shook the last of the pond water from his head. “Well, David, the Recovery Team will be here in a minute. Can you leave me and my craft outside your front gate, so they can pick me up? Thanks again.” Reg held out his tiny hand and shook the tip of David’s right index finger. David felt numb.

“But I’ve so many questions to ask. Will I see you again?”

“Oh yes, I nearly forgot! As a big ‘thank you’ for the help you’ve given me, just call my Manager, and he’ll arrange for you to visit me in Leicester, all expenses paid. Here’s my business card. You might need a microscope to read it though.” Reg carefully placed a small speck in David’s palm. “Reg? You said you were on an exchange visit. So, someone from earth must be going to your planet?”

“He’s already there. Your Cultural Ambassador came over to us, several of your earth decades ago. He liked it so much he decided to stay. I can’t tell you his name because it’s a secret. But I can tell you that he’s an entertainer, and he arrived wearing a rather sparkly white jump-suit and shades.”

“Ask your elders. They might be familiar with him.”
And there the story appeared to end. David never did see anyone pick up Reg and his tin can. But disappear they did. The speck of a business card also vanished, although it’s possible it could have slipped through David’s fingers. Strangest of all, The National Space Centre denied ever having had intergalactic visitors. “This is a serious scientific institution, young man – although to be fair – we have two Daleks in the foyer.”
David looked to the heavens and wondered if somewhere in the Delta Quadrant, Earth’s Cultural Ambassador was feeling lonesome tonight. After some reflection, David took the blame for the cracked window and decided he wouldn’t tell Josh about it after all.

5 thoughts on “Back Down to Earth”