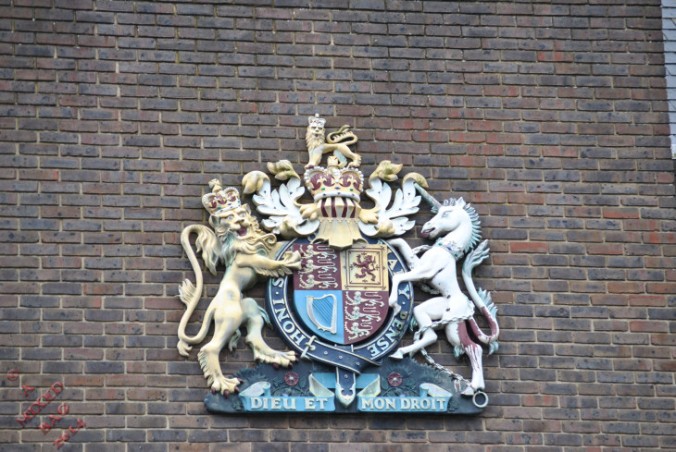 “And on to our final item – Lot number 42 – ‘The Royal Coat’, believed to be one of mysterious street artist Binky’s undiscovered earlier pieces.

A hush fell around the packed room. The auctioneer banged his gavel down with too much enthusiasm. It skidded into the third row, and rendered a tabloid journalist unconscious. No-one appeared to notice.

“Before we start, I must point out that this piece has an unusual covenant attached to it. The owner has to ensure the financial upkeep of the building to which it is attached.” Everyone agreed that the cost of the covenant would literally be a small price to pay.

With the gavel back in safe hands, the auction started. Things began steadily, with the serious players hanging back. But soon the price had crept up and over the £10 Million mark. Unbelievable! And so it went on…

When the hammer finally came down, there were gasps, cheers and hurried phone calls to editors. £520 Million was the final price!

Mr Inkerman and his class had been waiting nervously in a side room. When the news broke, there were hugs, high fives, and tears of joy. They hadn’t bid in the auction – they were, after all, just an art teacher and students in a crumbling college, that was being sold off to an uncaring City developer.

But Barry Inkerman (‘Binky’ to his students) had other ideas. They worked overnight on the college wall. It was all a bit rushed and raw – like someone learning their trade. But unmistakably Binky, for all that.

And now the college was safe. Who knows, it may even get a new extension for the Art department.

This story is inspired by the photo supplied by Al Forbes of Sunday Photo Fiction, August 28th, 2016.  For more details click the logo.