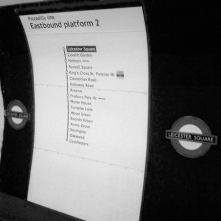 I took these images with an iPhone 4, while on a station platform on the London Underground (known as “The Tube”). I used iPhoto to give them a Black-and-White effect. I liked the look of the grainy images, so didn’t try and clean them up.

As I enjoy writing short fiction, the photos inspired me to write a 250 word story, which follows.

It was around Midnight when I first realised he was following me. A stranger, who looked slightly familiar. After taking in a West End Show and a meal with friends, we headed our separate ways. I decided to take the Underground. It was only a short walk to the nearest Tube Station, Leicester Square but I kept a brisk pace, not knowing what time the trains stopped.

I travelled down the 177 feet of escalators to the Piccadilly Line. This late at night, the station was surprisingly busy. The atmosphere seemed friendly and it was only when I got onto the Eastbound Platform that I began to feel uncomfortable. That prickly feeling of being watched.

The lights of the approaching train caused a few people to push up close behind me. I felt a hand grab my jacket. I broke free and stepped forward desperately hoping that the doors of the slowing train would open.

That’s when I saw him, or rather his reflection. A grinning man standing a few feet away, waving a wallet. Even before I felt my pocket, I knew it was mine. I was caught up in the throng leaving the train, as the doors slid open and was carried away from him. I saw him laughing, before he disappeared from sight.

Then he was standing next to me. I tensed, ready to grab him.

“I hope this is your wallet, sir! I’ve followed you from the restaurant in Chinatown. It was left on your table…”

This is my contribution for the iPhoneography Challenge: Black-and-White, hosted by Lens and Pens by Sally. Click the link for more details.

To see the current challenge, and the other entries, click the logo.

Error: Twitter did not respond. Please wait a few minutes and refresh this page.